The Importance of the St. Patrick's Day Parade 2008 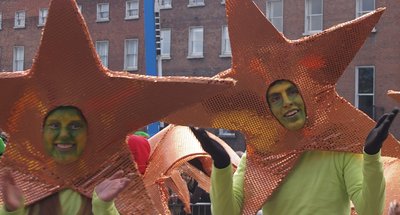 The St. Patrick's Parade, on Monday, March 17th, 2008, was an important moment in Irish history. This is our national holiday, the day where everyone of all races and creeds, have the opportunity to express their happiness, showing that this in this peaceful society in the future. Some don't look at it this way, but the crowd, the police and the performers, felt a strong feeling of freedom and peace. A day of united celebration which is a mini version of World Peace.

Myself, Shiera O'Brien and 'Harvey' were located at the beginning of the parade. The organisers allowed us to have seats at the Grandstand, giving space for Harvey and his wheelchair, being treated like ringside VIP's. It was an honour to be at such a privileged position. At the same time, unconsciously hundreds of people saw Harvey's orange wheelchair, which will appear in their minds again in the future.

Shiera was present, taking some video and still pictures at the parade. It is a simple thing to do, however these pictures and this web page are now the platform of the walk of peace from Dublin to Belfast, a continuation of the walk I completed across Australia last year. Shiera and I know very well of the power of the ripple effect, that any positive action or thought, will continue and the ripple spread outwards. I am inspired by this parade and because of it, I now carry this positive energy and happiness with me on my walk to Belfast.

For thousands of years, the human mind was stuck in a 2 dimensional way of thinking. Over time, intelligence grew and eventually the human mind finally accepted and understood of the 3rd dimensional world. It was only the fear of the unknown, kept our minds trapped in the past. Now there is enormous changes in the human mind again, getting closer to another new dimension, faith and science, imagination and technology combined. Intelligence grows each second, like growing upwards, stage by stage. It is part of evolution. Those who hold on to what they know now, will miss out by not thinking of the future. It seems natural to hold on to something that one finally understands, however is it even more important to have an open mind of what is possible at the next stage of learning.

Intelligence never stops, it is easier to accept it and modify ones thinking rather than go blindfolded as that's where ignorance grows. I myself have no concept of what is possible in the next 20 years, but I am enthusiastic and positive of the future. The Roman Empire mentality has failed so many times just like other empires, British, French, Nazism and still being used today by the super powers. I am not afraid of the impending changes ahead, I prefer to embrace it and imput my own impact of peace, creating my small role as a peacemaker on my own journey. I am part of the future too. 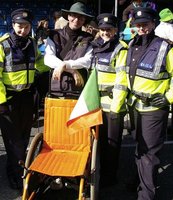 Myself and Harvey, with the 3 bodyguards (protecting Harvey!!) - A blast of colour

I know in my heart that the world is not coming to an end, it is coming to the end of an age of ignorance. Even the most misguided people know in their hearts that there is a lot of falsh information being embedded in their brains, through advertising, the media and our own political leaders. It is a joy to see so many young people, following theor hearts, doing what they were born to do, and it will be theose who will inspire and lead the next generation.

The St Patrick's Parade was a visual manefestation of the future. The world joint together in happiness. There are more St Patrick's Parades now than ever, from Boston to London to Melbourne. You wouldn't need to have another parade now, would you? Well I intend to create my own celebration on the way to Belfast and anyone is welcomed to join in. 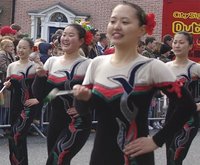 I wish to thank Katherine O'Riordan, an organiser of the St Patrick's Parade, for allowing us to participate in such a symbolic and successful event.