So it's finally over, or did another just begin?

Harvey, the symbolic and invisble character for peace, has been kissed, hugged, arrested, run over, and pushed across Australia from Perth to Byron Bay from April 2nd 2006 to 29th September 2007. Harvey was helped by Frank Muldowney, and hundreds of those who walked or contributed in completing this funny, inspirational, origional, political and imaginative journey.

The ending was different than some thought, as Harvey was pushed through the tape beside the famous Cape Byron Lighthouse by Indigo (15) and Paul (51). Frank stopped at the end and passed the wheelchair to the two inspiring people who touched Frank's heart on the journey, who are now starting their own dreams. Frank did not complete the walk just 5 metres short, and instead went to the love of his life Jacky Agosti.
"It was never about kilometres and records" said Frank.

"I never had a desire to end this walk, it's the beginning and living it was the greatest happiness I have ever felt. The last 5 steps, to me, is there to remind anyone who never tried to follow a dream, as it's the trying is the key, not necessarily the acheiving" said Frank. "Trying to create peace in myself and others, brought true happiness
in my heart, so I now know, happiness is the way to peace."

A few minutes later. Frank (smiling as he actually pulled a muscle on the last kilometre) strolled to the people who travelled long distances to congratulate him. The Mayor of Byron Bay, Jan Barham welcomed Frank to the town, and both has a few words of the importance of believing, thinking and creating peace. It was an emotional and inspiring day for many.

The beginning in Perth - Harvey, the magnet, attracting friends in Melbourne

Annette Walton (Film Director) recorded the day, from the morining till dusk, and NBN TV also recorded the conclusion of the journey. The web site will be updated in the next few weeks, when the recorded moments can be shown both here and on You Tube.

There is a major 'thank you' to so many people who supported Frank from the beginning till the last few weeks of this journey. He wishes to publish all the names of those who were a part of the entire walk. 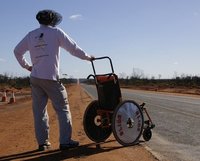 Posted by fmuldowney 19:19 Archived in Australia

Congratulations to Frank and Harvey - what an achievement for peace for fun for the world and for all the people in it.

For once, words fail me. Magnificant and the perfect 'ending' to an incredible inspirational journey.

it's funny to turn on a computer for the first time in three months expecting a backlog of emails and stupid forwards that will take weeks to sift through, and instead being greeted by the news that frank and co. have made it to the promised land, just caught it out of the corner of my eye the words byron bay and harvey together in the one sentence. I cannot believe that what once seemed to be dragging on through the western desert for endless arduous months has hopped skipped and jumped half way up the east coast to the beacon of light that signals the end of the journey. The beginning of another for frank. But for me, and many others, it is the end of something we can only dream about. It is the stuff of dreams, and frank has conjured up one unforgettable one. Tears hugs and respect frank mick amanda kia harvey jacky and to all the other special people who have stamped a big peace sign across a continent. It hurts me to know i missed it, but i get great strenght from knowing that they achieved what they set out to do. I have a mission about to take off very soon, i can only hope that it goes as well as harvey did.
I'm more proud than imagination will let me be, enjoy your rest frank, you have made the world a better place,
you know that.....

Congratulations! Hooray for Harvey and you : )
A peaceful completion of a peaceful journey!

Well Frank Muldowney you made it. We made it. Everyone has made it. We did it mate. With the help of so many beautiful wonderful dreamers, friends and fellow spirits. It feels like yesterday we saw you on the stage at that talk over 2 years ago. We were honestly compelled to help you, there is no other way to describe how we felt. From the moment we heard about Harvey we believed. We could feel the deeper meaning. To watch you walk was one of the most amazing, inspirational things that we will ever see. To have had the chance to walk with you, especially on the Nullarbor with our friend Steve by our side and to dance, sing, live, watch movies, laugh and cry with you has been enriching and life changing and it will stay with our family forever. You are the big brother I never had and you will always be a part of our family Frank. Kia loves you and Harvey so much and you taught her how to spell her name. And I am teary thinking of the connection that you and Mick have. Thank you for leading us to our paradise home in the rainforest and for the time of our lives. And thank you to Harvey, in whom we shall always believe...