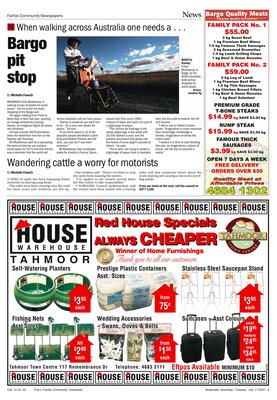 Frank Muldowney in Bargo on his 6000-kilometrewalk across Australia for world peace.

IRISHMAN Frank Muldowney is walking across Australia for world peace – but he could not resist stopping at the Bargo pub. He began walking from Perth to Byron Bay in April last year, pushing an orange wheelchair carrying Harvey, an imaginary figure for peace and kindness. He had covered 4926 kilometres when the Advertiser met him on the freeway last Thursday. Mr Muldowney said he is spreading the word on how we can achieve world peace by 2015 and that Harvey was a reminder that the world will
remain disabled until we have peace. 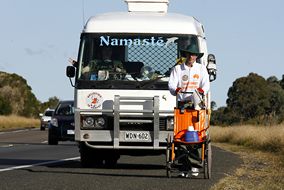 ‘‘Harvey is whatever you want him to be – he is your own dream for peace,’’ he said. ‘‘If you think about it, all of the peaceful people like Martin Luther King and Mother Theresa are still alive, you just can’t see them anymore.’’

Mr Muldowney has completed walks for charity in France, Spain, Ireland and Peru since 1989 – millions of steps and each one part of a pilgrimage of peace. ‘‘The Camino de Santiago is the oldest pilgrimage in the world with 20,000 walkers a year, and the wisdom and peace that grows into the hearts of every pilgrim spreads to others,’’ he said.

‘‘This is why I am trying to create a pilgrimage of peace here in Australia, then link this walk to Ireland, the UK and beyond. ‘‘I like to use an Albert Einstein quote: ‘Imagination is more important than knowledge; knowledge is limited, imagination encircles the entire world’. ‘‘I believe it is time to start thinking this way, as imaginations, visions of peace, are the way to become a reality.’’ 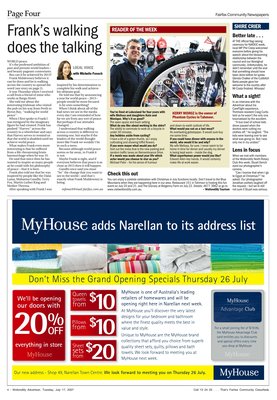 Frank’s walking does the talking

WORLD PEACE - It’s the professed ambition of past and present world leaders – and beauty pageant contestants. But can it be achieved by 2015?
Frank Muldowney believes it can be done and he is walking across the country to spread the word.

It was Thursday when I received a call from a friend of mine who works at Bargo Hotel. She told me about the interesting Irishman who visited the pub on his way from Perth to Byron Bay, ‘‘walking for world peace’’. When I first spoke to Frank I was intrigued by the imaginary figure he had created. Frank has pushed ‘‘Harvey’’ across the country in a wheelchair and says that Harvey serves to remind us that the world is disabled until we achieve world peace.

What makes Frank even more interesting is that he suffered
from a life-threatening brain haemorrhage when he was 19. He said that since then he has wanted to inspire as many people as he could with his philosophy of peace – that it is here. Frank also told me that he was inspired by people like the Dalai Lama, Mahatma Gandhi, Terry Fox, Martin Luther King and Mother Theresa. After speaking with Frank I was inspired by his determination to complete his walk and achieve his ultimate goal. He told me that by announcing a year for world peace – 2015 – people would be more focused.

Is he onto something?

When I think about all of the bad news we see in the media every day I amreminded of how far we are from any sort of peace. But perhaps if our attitudes changed. . . I understand that walking across a country is different to running one, but maybe if the leaders of the world thought more like Frank we wouldn’t be in such a mess. Because although world peace seems so far away, to Frank it
is not.

Maybe Frank is right, and if everyone believes that peace is as close as 2015 then it will happen. Gandhi once said you must ‘‘be’’ the change that you want to see in the world – and that’s exactly what Frank Muldowney is being.

Posted by fmuldowney 19:46 Archived in Australia