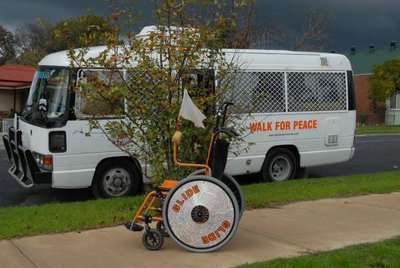 Namaste having a word with Harvey...

Just on the last walk to Goulburn, and the bus 'Namaste' (or Nammy) decided to have a little snooze in the morning.

Nathan and I both thought is was a battery problem, but no, it is the started has just gone 'kaput' and Namaste is now being taken care of by the mechanic's of Goulburn.

This means a day of leisure for me to rest my feet, but still things to do. Nathan is giving blood to the Red Cross, we were intervied by the Goulburn Post also, and we alert the local radio stations, and the school. It is a little frantic to do so much in one day, not forgetting to eat and wash ourselves when we have a chance. 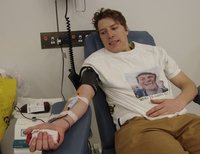 Nathan has come to be 'The special one', as after his blood donation he is B positive! Me being Irish and common, my blood wasn't really wanted as I am from the 'mad cow disease' part of the world, thus Nate is a much more wanted person in this funny town. Well done Nate :-)

We are both modelling the new T shirts - 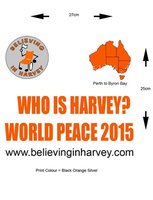 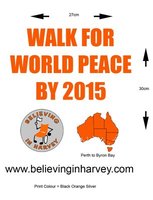 It all looks like a joke, and yes I am smiling, but jokes aside, if one believes in peace then what are you doing about it, and if so, then when? I hope this way of thinking will persuade people to act more rather than just talking about it.

It has raised a few eyebrows, and gets even more confusing when people asked who announced world peace by 2015. I just say, Harvey announced it, the peacemaker, who else can.

Posted by fmuldowney 21:00 Archived in Australia

you're dead right frank, nobody can question harvey, a symbol for peace, unity and harmony. Some will not listen, but there's every reason to keep at them, kickin' at their heels til they succumb to what lies within and only needs a gentle push start (did ya try that with Nammie!!). Best of luck on the road ahead, or i suppose it's better to say, Keep on doing what you are doing in the same old place you always stand in, it's the other folk you pass that are on the most uplifting journey. xxxxxxxxxxxx

My dear friend Frank,
Your dedication and inspiration is touching the world and the people that you meet on your journey (I'm one of them)! Keep up the good work!
Big hug & xxxx