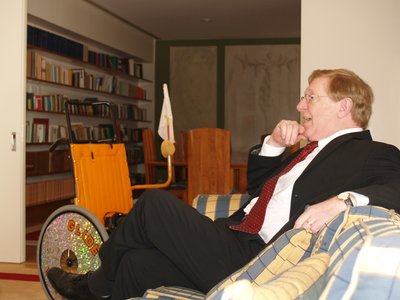 I restart the walk tomorrow, the main road from Canberra to Sydney.
But before leaving the capital, it was an honour to be set on my way by the Irish Ambassador Mairtin O Fainin.

Inge, Nathan, myself and of course Harvey, were welcomed in the Ambassadors office to discuss this walk, it's meaning and it's future. We were talking about peace in Ireland today and ways of trying to inspire other people and nations, that peace is a desire in so many peoples hearts. 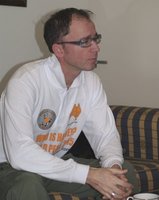 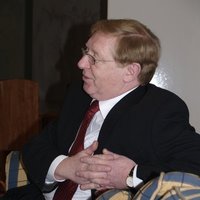 A chat over tea.

I felt privileged to be welcomed into the Irish Embassy, with a touch of pride in my heart that Ireland has achieved so much during my life, and it was a private moment of happiness when the Ambassador gave me the text of the Taoiseach Bertie Ahern's speech, 'Joint houses of Parliment, A Shared History, A New Partnership'. I was on the road walking to Melbourne at the time, and it is a pleasure to read this historical sreech now. I believe Ireland's future will inspire so many other nations, that world peace is more than just possible, to me it's inevitable. 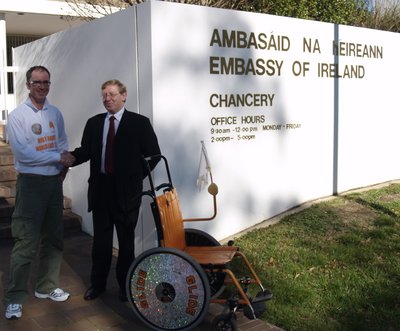 Inge and Nathan are both Australians who also have the same desire for peace in the world, who have already built friendships in both Australia and other countries in their lives. We enjoyed our cups of tea feeling positive about the future, but still aware of the challenges ahead.

I wish to thank the Ambassador and staff of the Irish Embassy for their time and support of this journey, and each step that I now make, I feel acknowledged and energized to make a real difference ahead.

Pictures taken by Inge and Nathan - more to be shown on this blog later on.

Posted by fmuldowney 21:12 Archived in Ireland