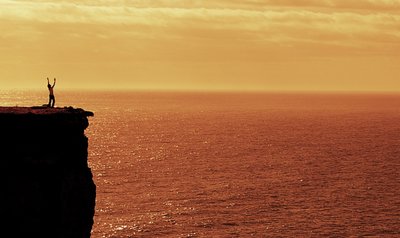 Mick McHugh, on the cliffs of the Nullarbor.

For those who do not know Mick McHugh, well let me explain why he is a key role in making the path to Byron Bay.

I have walked with so many inspiring people during my charity walking years. Mick joned this journey to be my driver in Western and Southern Australia, and on the way he created over a dozen songs, aimed to inspire people on the way. Being a driver doesn't look that much of a role on a journey where so many think it's just like a holiday. Well, I will say this - I collapsed on this walk on the Nullarbor. It was a seizure, one that I never thought would happen, the worst I ever had. Mick was present when it happen, and it is a very frightening experinece, when one does not know exactly what to do. After over 30 minutes of the seizure, Mick played music and placed his hand on my back, talking and keeping my mind as alert as much as one can. I know those simple touches of love, brought me back from that dark alley. I did not know what happened. 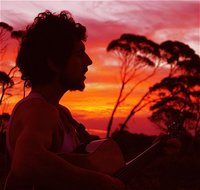 Mick on the Nullarbor, and Mick with family and friends in Melbourne.

Mick and I were stuck in Caiguna for 4 days, trying to find out what is the best thing to do. At the end my health was no better, and Mick had the most heart breaking part of the journey when he had to drive me back over 1,000km to Perth where I had to fly home to Ireland for medical observation.

That was a turning point on the journey, as Mick has never lost faith in 'Believing in Harvey' and it is fitting now, that Mick and his family will be there in Byron Bay promoting now his own songs, and at the same time having their arms wide open to welcome 'Harvey' on the last day. 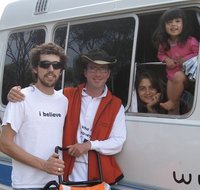 Namaste to Mick Amanda and Kia

Posted by fmuldowney 05:55 Archived in Australia

Frank, It's amazing the way a few weeks spent working can pass you by quicker than you know, and somewhere, someone, a friend, the other side of the world, takes dreams and hopes to a new level by bounding across the globe.
Last thing i knew you were in Melbourne, next thing i know you'll be in Sydney. You must be exhausted but at the same time fulfilled. We are so proud of you Frank, in fact we want you back here soon to tell you so. Until then, keep on truckin'