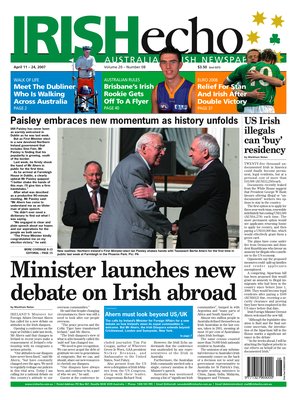 Harvey appearing on the front page. 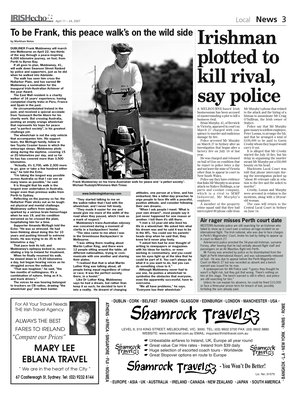 To be Frank, this peace walk's on the wild side

Dubliner Frank Muldowney will march into Melbourne on April 22nd, two-thirds of the way through a peace-inspiring 6,000km journey, on foot from Perth to Byron Bay.
If all goes to plan, Mr Muldowney 41, will walk down Swanston Street flanked by police and supporters, just as he did when he walked into Adelaide.
The walk has seen him cross the Nullarbor Plain, and has earned Mr Muldowney a nomination for the inaugural Irish-Australian Achiever of the year award.
The East Wall resident is a charity walker of 16 years' experience, having completed charity treks in Peru, France and Spain in the past.
He circumambulanted Ireland in 1993 and received a special accolade from Taoiseach Bertie Ahern for his charity work. But crossing Australia, pushing an empty orange wheelchair that reresents his hope for peace and "a perfect society" is his greatest challenge yet.

Mr Muldowney plods along during the daytime, covering 20km approx. per day, and so far he has covered more than 3,500km. "Actually it's 3,700, with 2,300 more to go, give or take a few hundred either way" he told the Echo. "I'm taking the longest way possible across Australia so that I can see as many towns as possible," he said.

Reflecting on the journey so far, the Nullarbor Plain sticks out as the toughest physical and mental challenge. Mr Muldowney suffers from epilepsy, sparked by a serious brain haemorrhage when he was 19, and his condition worsened as he crossed the plain, hospitalising him for a time. The pace took its toll, and Mr Muldowney's epilepsy kicked in, necessitating a trip to Ireland for treatment. When he finally resumed his walk, he slowed down to 20km a day, but began hearing voices as he struggled across the outback.

"That was the toughest," he said, "the two months of nothingness. It's a combination of nature, living as it is, and truck drivers." The voices he was hearing belonged to truckers on CB radios, drawing "the wheelchair guy" into their banter.

"They started talking to me on the walkie-talkie that I had with the wheelchair, and I never felt lonely. They made it easier for me and would give me more of the width of the road when they passed, which I took as a mark of respect."

Mr Muldowney's trans-Australian odyssey was conceived during a moment of clarity in a backpacker's hostel. "The idea came to me when I was in the Greenhouse Backpackers' in Melbourne. I was sitting there reading about Martin Luther King's speech 'I have a dream..' and there were 12 people sitting around the table, all different nationalities, trying to communicate with one another and sharing their plates. I realised that this is what Martin Luther King was talking about, all people being equal regardless of colour or race. It was the perfect society, there, in a hostel."

Like Dr Luther King, Mr Muldowney says had a dream, but rather than keep it as such, he decided to turn it into a reality. He dreamt of changing attitudes, one person at a time, and has embarked, like a latter-day preacher, to urge people to face life with a peaceful, positive attitude, and consider following their own dreams. "When I ask people I meet: 'What is your dream?', most people say it just never happened for one reason or another. I tell them it's still there. I met a 12-year-old who lives his life in a wheelchair whose dream is to be in the AFL. You can see his parents' heads drop when he said that, they knew he'd never play footy. I asked him had he ever thought of writing to newspapers or magazines with his ideas for tactics, or even working in commentary, and you could see his eyes light up at the idea that he could be part of it. You can't always do what it is you want to do, but you can do something close to it."

Although Mr Muldowney never had to use one, he pushes a wheelchair to symbolise the obstacles that everyone, even the apparently successful, have to overcome. "We all have problems," he said. "Everyone has their own wheelchair."

Posted by fmuldowney 19:58 Archived in Australia

John sent me the link so I hear that you are run off your feet down under. I think that you are great to do something that is important to you in life other than the usual material things and the very best of luck with your journey and I will keep track of your journey. All the best Kieran Tarpey in Ireland

Hi angels :-)
so excited to hear you are near Melbourne. I hope you all are fine. Keep living your dreams.
I am sending prayers to the universe for you.

Frank, if u need new runners sure you will find some nice in the mega-shoe-city Melbourne ,-) if you need support with buying shoes, let me know I LOVE BUYING SHOEEEESSSS...
:-)
Love
Kader